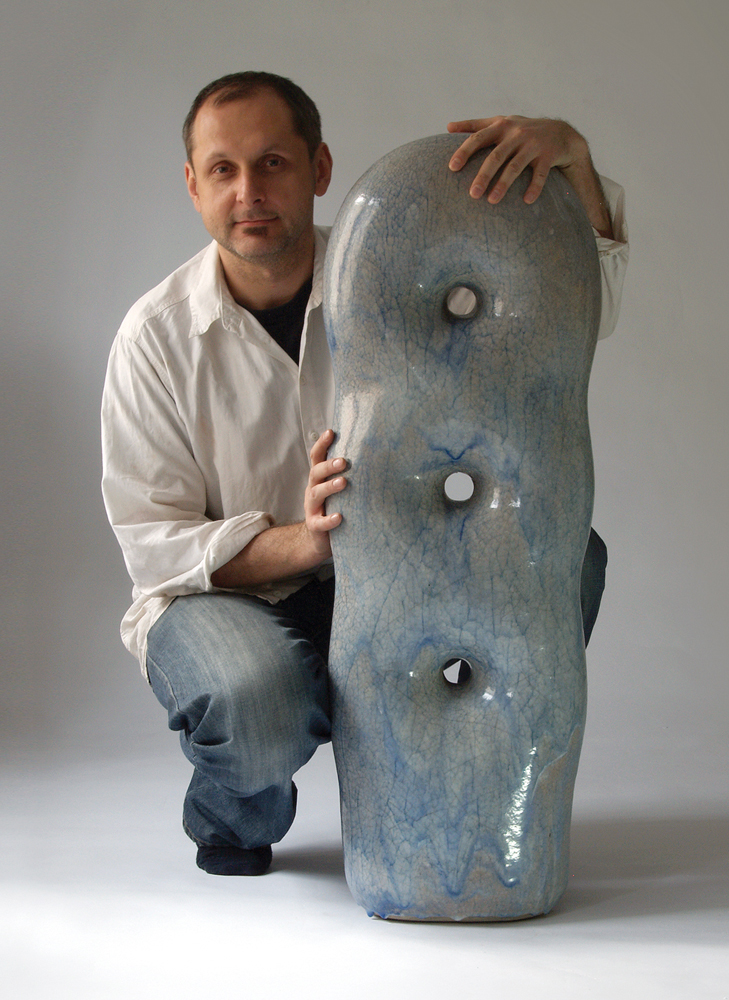 He has shown his works at over 50 collective and individual exhibitions in Poland and abroad. This year, his output earned him a honourable mention at the 8th International Ceramic Competition in Mino, Japan.

I am interested in the relation between a form and function of an object. It is the result of my conviction of a special aesthetic value of everyday objects. For me, functionality is where an aesthetic analysis of a form of a specific object begins.

My objective is to practise art which will be understandable, if not by means of a rational or intellectual analysis, then by means of feelings, senses and an aesthetic pleasure.

In my creation I aim at the purest, most simplified forms. Forms devoid of any unnecessary details. Simplicity, however, is not an aim in itself, but a result of a search for a proper shape occasioned by an aesthetic analysis.

No matter to what extent my works are abstract, the utilitarian aspect is always present. Sometimes it is more clear (like in non-utilitarian forms), where in others it focuses on specific ideas related to functionality.

My works are inspired by a rich tradition of artisan and industrial products. Characteristics of human-object relationship are recorded in them. I focus on reciprocal relations between objects themselves and their users. What I am interested in are objects that people use, take advantage of to contact with others; objects by means of which they inform about themselves; objects which symbolize (or may symbolize) some ideas; objects that are signs used by people to communicate with one another; objects which carry more and more memories, which are hard to part with; objects – relics, fetishes; objects that become artefacts.

To look at or to use?

A range of ideas covered in the phrase “To look at or to use” is broad and covers a lot of various aspects. They range from usefulness and unusefulness, the touch and its avoidance, mass and unique product. I would like to show how close the two opposite realms of utilitarian art and of so called pure art come to each other. How often it came to the transition and overlapping of the two spheres.

The Exhibition will present the works from the Ctrl C, Ctrl V collection which comprises three groups of ceramic objects: Triplex System, SVC / SHC and Non-Utilitarian Forms. The title Ctrl C, Ctrl V refers to the two popular keyboard shortcuts used in the majority of computer applications: Copy, Paste. They refer to an issue of repetition, machine production, which is highlighted by the titles of specific works. The works in the Ctrl C, Ctrl V cycle have features of utilitarian forms, even though they are sculptures made in clay. Their ambiguity is evident in the association of the utilitarian and aesthetic function.

Receptacles (cut bowls and vases) will be on display as well. Bowls and vases were designed to underscore the influence of senses, the touch in particular. Their hand friendliness, differentiation between smooth inside and textured outer surface are means I took advantage of to enhance tactile sensations.

The choice between “To look at or to use” is not only the privilege of an author who, by virtue of a specific presentation of an object suggests its use. A recipient himself decides which of the two groups an object belongs to. References are a subtle game. They are not literal and leave some space for suggestions and clarifications. Thus, a relation of an object with a recipient, based on impressions and reminiscences, can be enhanced.